Where To Go to Catch The Tarpon Of Your Dreams 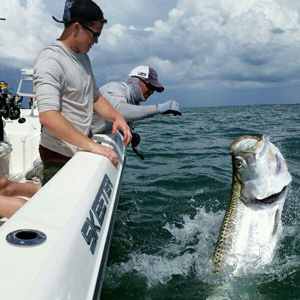 Do the high-flying acrobatic leaps of a trophy tarpon excite you? How about the thought of the doubled-over rod bending action from this hard-charging fish known as the "silver king?" If you are an avid angler�saltwater or freshwater�you know the tarpon is among the gamiest sport fish of them all. Why? When you hook up with a tarpon, there will always be a fight to remember, and even better, you can release them at boat side to be caught another day. What is more, tarpon can grow up to eight feet long and weigh over 200 pounds.

Tarpon can be caught in the inland waters of the Gulf of Mexico from Texas to the Florida Keys and northward along the Atlantic Coast. Some places are better than others, and there is none better than the west coast of Florida around Boca Grande Pass. This hallowed spot is undeniably known as the "Tarpon Capitol of the World" because of the setup that is ideal for the prized gamefish. A natural channel cuts deep through the pass between Gasparilla and Cayo Costa islands, creating a funnel that sweeps baitfish, shrimp and crabs in an out of Charlotte Harbor.

Each year the tarpon migrate along the Gulf Coast of Florida, feeding in Boca Grande before going out to sea to spawn. From late April through early August, thousands of anglers travel there to battle 100-pound fish. Even with the angler pressure, the fish are there to support it.

Boat traffic is high, and so are tensions when the fish load up on the pass. That makes hiring a licensed captain a must for this bucket list opportunity. You may want to look into booking the tarpon trip of your dreams with Captain Danny Latham, proprietor of Reel Fishing Charters (reelfishing.com). Captain Latham operates at several locations in the tarpon-rich waters of southwest Florida, including Boca Grande, Cape Coral, Punta Gorda, and Pine Island. You can find out about rates and book a trip on his website. Latham has been guiding full-time for 26 years and counting.

"We have a six-month tarpon season which is phenomenal for the fish to be here that long," he said. "But what else makes this place special are the number of species available all year long."

Those species include snook, a fish prized especially by fly anglers hooked on their long, hard-hard charging runs in mangroves and inshore areas. And for the tarpon, the season only gets better toward the end.

"August and September are absolutely phenomenal because the fish are not in the spawning mode," he explained. "You might see hundreds of migrating tarpon during May and June, but those fish aren't aggressively feeding like they are later on."

Another reason to book a charter with Capt. Latham is his choice of boat in the Skeeter SX240.

"The layout is just fantastic for my clients and me," he explained. "What I really like is the storage, and by that, I mean the rod lockers that can hold nine-foot fly rods and eight-foot tarpon rods, which you cannot do in some boats."

"The ride is just awesome because our bays get really choppy and the SX240 is just a good stable platform," he continued. "My clients almost immediately comment about the smooth, dry ride, they just love it."

"I really like the updates, and it proves why Skeeter is a leader in the category because they continually refine what's already ideal in a boat," he said. "The Comfort Console, Deluxe Lean Post, and Lean Post Baitwell are just a few examples."

The Deluxe Lean Post has a flip-up footrest, and dual flip-up bolsters for driver and passenger, creating comfortable options for sitting and standing. In the up position, the seating adds safer, more solid footing when standing to maneuver the boat. Folding armrests, grab handles, and pro series rod holders are more new features adding to the safety and convenience of the console space. The Deluxe Lean Post is a standard feature.

The Lean Post Baitwell holds 40 gallons to allow plenty of room for keeping larger bait healthy all day long. Skeeter didn't hold back on fish care with the larger baitwell. It now features an additional circulation pump to keep water moving and oxygen flowing throughout the tank. Rounded corners also protect bait from harm and allow them to swim in a natural, circular motion.

If you're ready to spend a day wrestling tarpon in the best boat on the water, give these Captains a call:

This document contains many of Skeeter's valuable trademarks. It may also contain trademarks belonging to other companies. Any references to other companies or their products are for identification purposes only, and are not intended to be an endorsement.