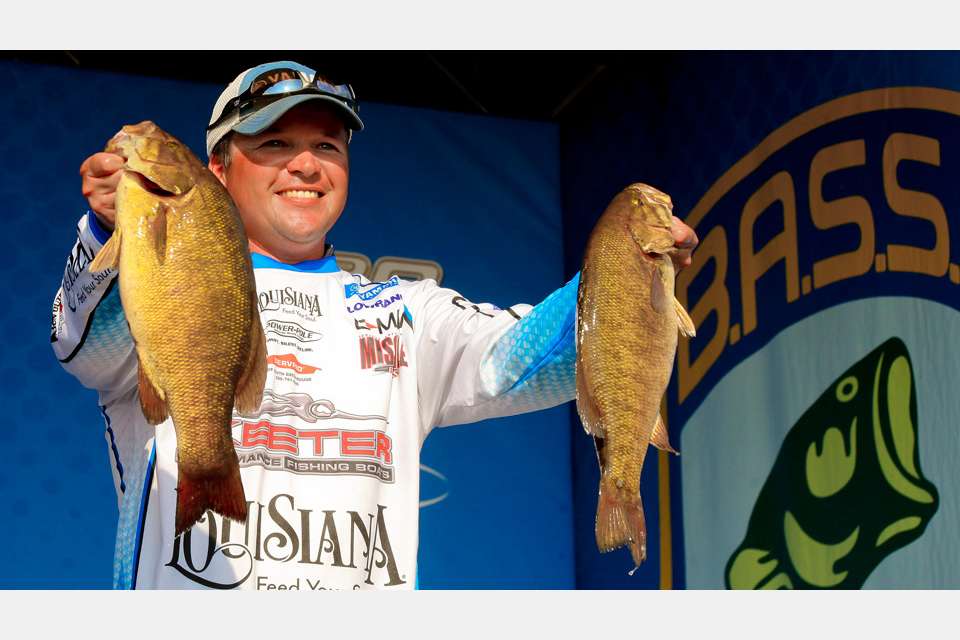 Derek Hudnall was just winding down from the euphoria of living the dream of every bass fishing pro wannabe. Last March, he competed in the Bassmaster Classic®, undeniably the most prestigious of all professional bass tournaments. In the sport’s world championship event, he finished 33rd, a respectable position for a rookie. The Louisianan had also just started his new career as a Bassmaster® Elite Series pro, which is the pinnacle of all the fishing leagues.

It seemed like nothing could go wrong. Life was so good. And then the emotional bottom fell out. Hudnall self-reported to B.A.S.S.® officials that he had accidentally practiced on Lake Hartwell, site of the third Elite Series event, just one day after the lake went off limits as per the rules.

“I screwed up,” he recalled. “I went through my calendar and marked 28 days before every event. Unfortunately, I marked it off from the start of the event, not the first practice day.”

Call it a rookie mistake or just bad luck. Either way, it was an honest mistake. If anything good came of it, Hudnall’s peers and sponsors respected him even more. Owning up to the mistake was just not enough for Hudnall.

“I asked the staff if I could be of assistance at Lake Hartwell,” he said. “I worked so hard to get there, and I wasn’t about to skip an event just because of an oversight.”

B.A.S.S.® officials took note and hired him to be a camera boat driver for the Bassmaster® LIVE show. Hudnall got back on schedule the very next week at Winyah Bay, also in South Carolina, where he finished 53rd on a tough tidal fishery. He refused to think the setback would keep him from qualifying for a second consecutive Bassmaster Classic®. He moved on to Lake Fork in Texas, finished 14th, and regained valuable Classic points in the Bassmaster® Angler of the Year standings.

What came next was another example of Hudnall's determination to rebound from the Lake Hartwell mistake. Two events would be held on the smallmouth bass-rich waters of the St. Lawrence River and Cayuga Lake, both in New York. Hudnall had little experience in catching smallmouth bass, yet he posted 25th and 29th place finishes, respectively, at the back-to-back events. Then, things were beginning to look up going into the final Classic qualifying event of the season, also on a smallmouth bass fishery, which was Lake St. Clair in Michigan.

During the official practice, Hudnall caught his personal best smallmouth bass, and three times on the same day. Unfortunately, he fell short with a 40th-place finish and, ultimately, 48th place in the final Classic standings. The cutoff for qualifying was 42nd place.

Qualifying for the Elite Series is anything but easy. It takes squeezing through a very narrow door of opportunity. That door is the Bassmaster® Opens, which is the feeder tour into the Elite Series. Around 200 anglers compete in a typical Open event, of which there are four during a given season. Only the top 5 anglers in the final point standings receive invitations into the Elite Series. When you do the math, you see that just getting in is a respected accomplishment. Last year, Hudnall finished third in the standings, which also gave him an invitation to the Classic.

Hudnall's character, moral values, and his outgoing personality are attractive to sponsors. Even for a rookie, the list is impressive. Skeeter Boats stepped up early on and remains a loyal supporter. All of the sponsors value Hudnall's ability to market himself and their products.

Hudnall is already looking forward to next season. His 2020 calendar is marked correctly this time, but more importantly, he now has the experience of knowing how to handle the tough knocks that come along. In professional bass fishing, much like in life, those can come from out of nowhere and Derek Hudnall is ready to roll with them.